Le Geek began from a single web page, via an assigned art school project.  Soon after–on June 12, 1997, it morphed into a site for reviews of old games. Scores were added, the look was redesigned, friends were enlisted to contribute, and the site was slowly but surely updated.

After another redesign, Eric Ruck joined as a regular contributor, and Le Geek aimed to publish quarterly, with mixed results.  After discovering the Neo-Geo, Ben added a section for Shock Box Inserts.

As Le Geek had striven to find its identity, the site suffered in two ways.  Firstly, by reviewing games “before their time”, foolishly trying to compete in the sea of other current game reviews, the subsequent content often required a second look once its console had run its course.  Secondly, the lack of regular updates seriously undermined any effort to woo new readers.

This latest version of Le Geek, will keep its retro focus by only fully reviewing games for “dead” systems–any current generation content will stay on the blog.  And the blog format will allow for frequent updates.

Whether you are an old reader or new visitor, we hope you enjoy your time here, and–hopefully–are encouraged to try out an old game you’ve never heard of. 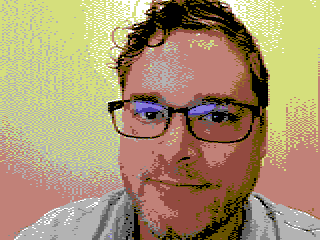 Ben Langberg – Founder:
Ben has been playing games since the Atari Video Computer System. He is old enough to have played the home version of Pac-man, but young enough to not have been upset about how much it didn’t match the arcade version.

He spent his later formative years with a VIC-20, quickly upgrading to a Commodore 64…and later an Amiga 500. Ben did not have an NES until it was old fashioned, but he would play it at friends’ and neighbors’ houses, and his favorites were Punch-out!! and The Legend of Zelda.

Eric Ruck – Contributor:
Eric has been fascinated by anything that plugs into a television and lets you interact with a screen since the late 1970’s when TRS-80’s started showing up at Radio Shack, waiting for mischief. After a long break from video games, he was pulled back into the scene by the original Playstation and Resident Evil. Then came eBay, and the basement was never the same.

Sentimental favorites include anything ever made by Atari, Sega and Vectrex. Modern systems remain in heavy rotation alongside the classics. And cell phones still don’t count as game systems.

4 thoughts on “About Us”

Review of the Moment